20 Free Newspaper Fonts All Designers Must Have

Searching for free fonts can be particularly tough, and often they may not be your best bet for the project. However, if you research enough, there are some awesome fonts that you can use free of charge. But research can take up a lot of time and effort, so here is a compiled list of the best newspaper fonts. We’ve already done the research for you, so that you can download and use these fonts, which are free of cost. Although some of them may ask for your email address, that is all you need to give to start using these newspaper fonts. The fonts are a combination of Serif & Sans Serif.

This blog focuses and offers you access to free newspaper fonts that all the designers should access. Let us take a look at them.

This is one of those fonts which give off a very modern and classic feel. It is a display font that is inspired by the Didone style and created by Rajesh Rajput. Emberly is also available for use as a variable font and is an excellent option for headlines.

Grenze is created by Renata Polastri and Omnibus-Type, as a font fit for use in magazines, but it would indeed work for a broader range as well. This font is inspired by blackletter font as well as Roman styles.

This font was developed as a part of the United States Web Design System and is based on Libre Franklin. Public sans font is free and an open-source font, which can be used with ease for interfaces, headings, and text. This font has a sober yet healthy look, with the least quirks as possible. Due to these factors, Public Sans can be an ideal fit for you. 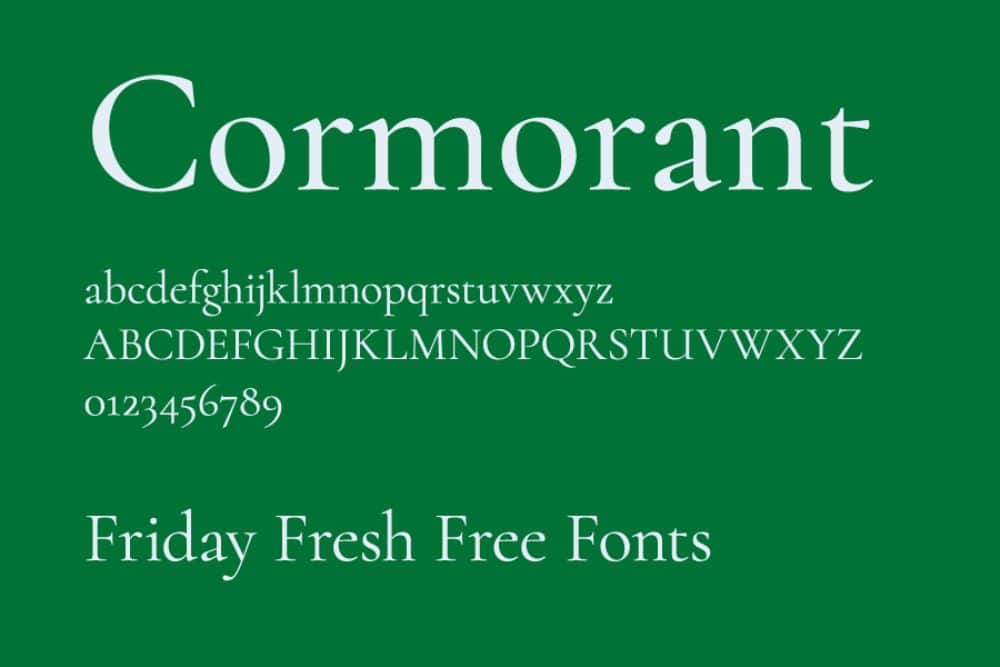 Out of all the free fonts available, Cormorant is an exquisite and formal font. It is developed by Christian Thalmann from the Catharsis Fonts. Inspired by the typefaces of the 16th Century, i.e., Claude Garamont, Cormorant is undoubtedly not a derivative.

The majority of the glyphs have been generated from scratch. It strikes a perfect and captivating balance between expressiveness and formality. There are 45 font files, including five weights and nine visual styles.

Chivo is an ideal font for headlines and other page parts where you want it to be captivating. It is grotesque, elegant, and looks confident as well. Chivo has been released in four weights, along with the matching italics. It is a free font and is done by Hector Gatti as well as the Omnibus-Type Team. 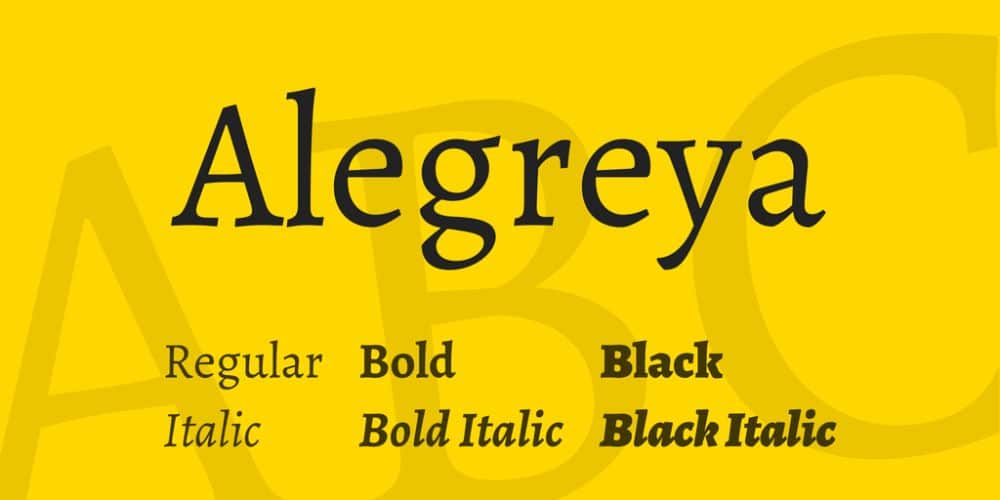 Alegreya is a significant exception when it comes to the fonts which are created for specific purposes. Argentinian designer Juan Pablo del Peral has created this, and this is an award-winning typeface.

This font has been created considering the aspects of book design. It has a very varied and dynamic rhythm, which is aimed at facilitating the comprehension of long texts. Alegreya gives a fresh take on the calligraphic style.

Titillium Web is of a respectable pedigree, with it is origins taking place in the type design project at the Accademia di Belle Arti di Urbino in Italy. This font is quite sharp and contemporary.

Also, it comes in a wide range of weights. However, Titillium Webworks perfectly well when it comes to larger sizes, and with consideration, it can also be used as a body font in some instances.

Libertinus Serif is sure to add a classy touch to your projects. It has a classic look, and it comes in 14 styles. This font is a fork of Linux Biolinum as well as Linux Libertine. Libertinus serif font is a solution for the bugs in these designs and is published under SIL Open License.

Designed by Google, Noto Sans supports more than 800 languages, 100 writing systems, and thousands of characters. It is a free font family intended to be harmonious across several languages due to its stroke thickness and compatible heights. The font family comprises of regular, italic, bold, and bold italic styles. Noto Serif is the serif sister family of the Noto Sans.

It is a highly versatile font which is designed by Intel. It is created explicitly considering the legibility on-screen. Clear sans font is free and has minimized characters with narrow proportions. This is why Clear Sans is an excellent choice for UI design and works well in long paragraphs and short labels. 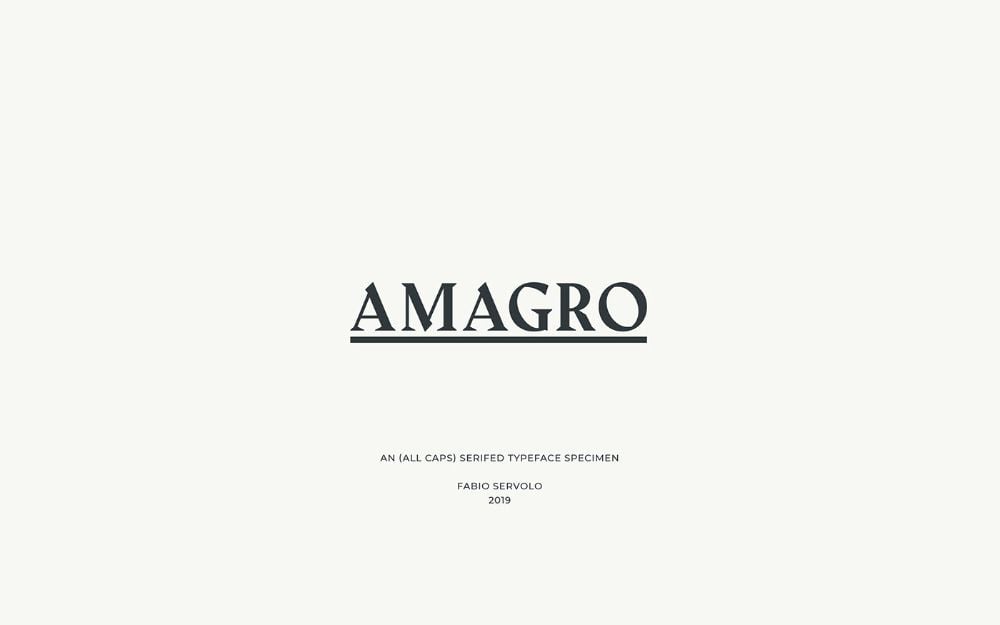 This font is introduced to the design community by Fabio Servolo. Amagro is an all-caps and serif typeface, which can be of excellent use for newspaper headlines. The numerics are very neat and legible. This font is perfect if you want a captivating design.

Archive Grotesk is a free and clean typeface, which has been created by Tomas Clarkson. The minimalistic features of the font are quite alluring and ideal for usage in headlines and magazines. This font includes lowercase, uppercase, as well as numerals.

This is a web font, which is optimized for the best usage in the body text- ideally 16px. These fonts have their roots in the font Baskerville by the American Type Founder from 1941.

However, Libre Baskerville has lesser contrast, more expansive counters, and a taller x-height. Due to these factors, it works out well on screen, especially for reading. Impallari Type is leading this open source project.

The font space website provides Chomsky font, and it is a freely available resource. This font is not supposed to be the replica of the New York Times masthead. But it can be helpful for using it to signify the running text, which explains the reason behind the larger stem size.

You can use this font style for building certification for graduation, newspaper masthead, and more. This font is available in TTF file format, making it easier for you to work with various newspapers. The fonts look like they have been created with a calligraphic pen and have varying stem sizes though the basic stem style is thick.

Latin modern roman is another newspaper font that is provided by the website called fontsc. The font is similar to times new roman, which is very old yet widely used for newspapers. Latin modern roman has varying stem sizes, but the stem at the beginning of the capital letter is thick.

These fonts can be used to put headlines, sub-headlines, titles, or the body text in the newspapers. They are legible and readable hence can be used at various places on the pages of the tabloids. Latin modern roman can be downloaded using the link provided here for free without any user authentication requirement on the website. Since the file format of the fonts is TTF, it can be used in various projects that include newspapers.

Old newspaper types font set was created by Manfred Klein. It is a distressed ink font that offers a vintage appearance. They are fascinating fonts as they look a little distorted like they have been written with shaky hands. These kinds of fonts can be used in old newspapers, advertisements, and other similar things. Old newspaper types include language support for Latin languages.

It includes all the Latin characters and alphabets you can use in various projects involving newspapers and tabloids. Since it is free for personal, professional, and commercial use, you can access the fonts from the link provided here. You can download the fonts from the website without having to create a user account on the website. As the file format of the fonts is in TTF, they can be used in various projects. 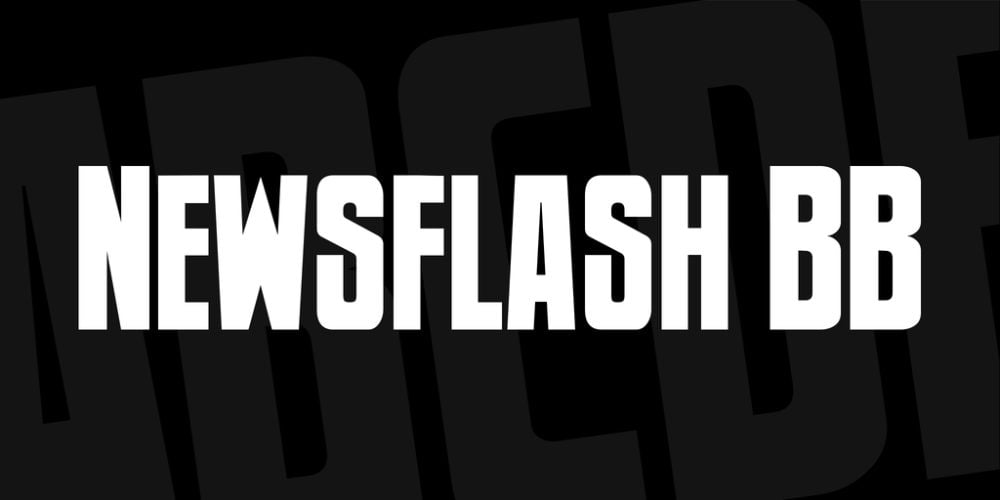 Newsflash BB is a block title font that looks similar to the fonts that were once used in the comics. You can use these fonts for either newspaper titles that catch the eyes of the reader or use it in the comics for superheroes. It is the first font in the open type format on Blambot to be offered for free. With thick format and letters, the fonts are meant to stand out and draw attention from the readers. It offers legibility, readability, and a clean structure.

It comes with a character set of 104 characters, which does not include lower case letters. You can use the fonts in your personal projects to highlight a title and grab someone’s attention. The fonts can be accessed and downloaded from the link offered here. Moreover, the website lets you access the font without creating a user account on it.

Abril Fatface is a smaller font face from the Abril font family. It comes with 18 different styles that can be used for display as well as textual content. The fonts specifically meant for the titles are a renewal of classic Didone fonts. They display neutrality along with a strong presentation that attracts the reader’s eyes. It has measured tension through the curves in it and also offers pleasing color contrast and color.

These fonts were inspired by heavily tilted fonts that were included in posters in the 19th Century based in Britain and France. With their thin serif and clean curves, they speak of refined style that offers any headline a lot of elegance. Its extended character set offers support to around 50 different languages, which include regions from Central and Northern Europe. As these fonts are available from Google Fonts, they can be accessed for free without any hassle. You can click on the link here to reach the fonts.

Rozha one appears to be a high contrast font, which is also open-source. It is surprising to know that it supports Latin as well as Devnagri scripts. There is a lot of difference between the font’s thick and thin strokes. This makes the font style ideal for use in headlines, titles, tag lines, and poster-sized fonts. The font was released in 2014 by Indian Type foundry. Tim Donaldson and Jyotish Sonowal designed the fonts for the Devnagri script.

But Shiva Nallaperulam designed the Latin character set. The characters of the Latin script are created in the fat face using modern or Didone style. This is similar to the type of character set that was used in the 19th Century. Rozha One does not differentiate between the upper and lowercase character set sizes to a great extent. The fonts include 1095 glyphs that extend their support to conjuncts as well as ligatures that the Devnagri script needs. This font can be accessed using the link provided here, and you can download the font for free from the website.

These fonts were developed in the early 20tth Century in the USA. Franklin Gothic was founded by Morris Fuller Benton from American Type Founders. Here the term “Gothic” means sans serif. These fonts have been used in various advertisements, as well as titles and headlines of tabloids and newspapers. Franklin Gothic maintains an outstanding reputation and appears in various media like books, articles, papers, tabloids, posters, and more. With its extended character set, it appears to support a lot of languages from around the world.

These languages include Afrikaans, Albanian, Danish, Dutch, English, Estonian, French, German, Portuguese, Italian, Icelandic, Swedish, and many others. It comes with bold characters that stand firmly in both uppercase and lowercase. Hence these fonts should be used to attract the reader’s attention for titles, taglines, subtitles, and other print media that needs attention. You can download the fonts from the link we have provided here. The website does not ask for user authentication to download the font, which provides a hassle free experience.

The designers need various types of fonts at various points of time in their professional and commercial projects. There are so many types of fonts out there that sometimes it gets challenging to choose the right ones. But when it comes to newspapers, you should always know which types of fonts work best for the selected section of the newspaper. This is equally applicable with tabloids as well. And hence, this blog provides access to all the widely used newspaper fonts you can download for free using the links.